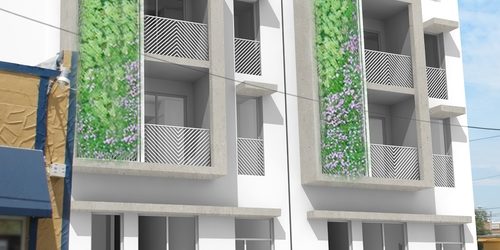 [This is Part 1 in an ongoing monthly series profiling America’s Progressive Developers.]

Miami, FL — In July of 2017, I announced the beginning of a Forbes series called America’s Progressive Developers, documenting the different forward-thinking builders I met while traveling cross-country. The initial two that I’m profiling—Carlos Fausto Miranda and Andrew Frey—are fitting first choices. They are young Miami developers who have limited portfolios, but expansive visions for how their city could look. Perhaps more importantly, they are some of Miami’s leading advocates for reversing the regulations that inhibit these visions — and the fruits of their advocacy are starting to show.

Fausto, who was born and raised in Miami to a Cuban refugee father and Italian mother, is owner of the realty and development firm Fausto Commercial Realty. The commercial, residential, and industrial properties he sells or leases are scattered, but his portfolio is focused primarily in Little Havana and Allapattah, two west-side immigrant neighborhoods.

Frey, a transplant from Massachusetts, first moved to Miami and worked for larger firms that built in the suburbs. In 2015, he started his own company, Tecela Real Estate Innovation, to focus on urban development. The company is developing two lots on the eastern edge of Little Havana that each contain eight small units.

Fausto and Frey got involved in real estate because they are dyed-in-the-wool urbanists who want to see better density and design principles in Miami. They also want it to become more affordable, something that doesn’t have to be a contradiction, but often is in today’s urban America.  As Fausto explained over breakfast in Little Havana, the city teems with new immigrants arriving from around the world, but lacks adequate housing for them, causing Miami to grow expensive, with citywide median home prices increasing from $171,000 to $301,000 since 2011. According to a recent Forbes analysis, it has a 2.2% vacancy rate, making it the nation’s worst city for renters. In human terms, this means that such immigrants, who nowadays mostly come not just from Cuba, but Nicaragua, Honduras, The D.R., Colombia, and the rest of Latin America, must cram together in small multi-room apartments.

As both developers discovered early into their careers, though, the government worsens this problem.

Parking regulations here, only recently amended, once required that all buildings have 1.5 spaces per unit. This consumed space for potential housing, and made urban formats like micro-units uneconomical. Miami also still has anti-density regulations that limit the number of units that can go within given buildings. This stops today’s developers from emulating the built forms that first made so many of Miami’s historic neighborhoods special.

Take Little Havana, the historically Cuban neighborhood that is famous for its culture and street life. As Fausto explained, the building types that define the area are now technically illegal.

The most architecturally prized buildings in the neighborhood are the 1920’s-built center-hallway buildings, built in a Spanish Revival, Mediterranean, or Mission style. Those tend to have 18 units, which roughly [equate] to 120-150 units per acre. Well, if you have an empty lot next to that building, more than likely it’s zoned T-4, which would only permit you to build 35 units per acre. You do the math, and, even assuming there’s no parking requirement, you’re building 4 units on that lot. So take that into consideration—the most prized buildings we have in the neighborhood…that contribute to the urban fabric of our city, and yet we cannot build those buildings today.

More crucially, it is worsening the affordability problem.

“Miami as a city is building an endless supply of palaces in the sky,” said Fausto, a trend that he enjoys, considering that he lives in one such building in the Brickell neighborhood. “But we’re not building in our medium to lower-income neighborhoods, and in particular we have an excess of small lots which are not being touched…And the reason they’re not being considered is because of the regulations that exist.”

He used his business as an example, noting that the vacant lots around Miami with “Fausto Commercial Realty” banners are the result of an uncertain and constrictive regulatory climate. But there are an alarming number of vacant lots everywhere in Miami–and they certainly aren’t all his. Fausto said that during conversations, he’s heard other developers cite Miami’s regulations as the reason they sit on, rather than improve, their underutilized properties.

Scott Beyer owns a media company called The Market Urbanism Report, and is traveling the U.S. to write a book on reviving cities. His Twitter handle is @sbcrosscountry.