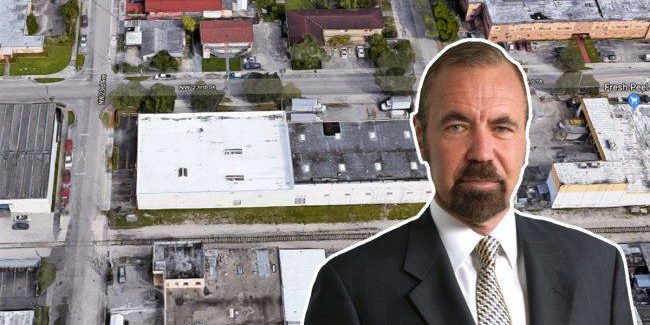 Miami’s condo king just closed on a site in Allapattah where he’s planning a mixed-use complex focused around art.
The Related Group chairman and CEO Jorge Pérez said he will store and show his private collection at the warehouse, at 2270 Northwest 23rd Street. Pérez said the property, which he paid $2.7 million for last week, is near his office and home.
Carlos Fausto Miranda and Diego Vicente Tejera of Fausto Commercial Realty brokered the deal. RG & JP Properties Inc. sold the roughly 25,000-square-foot building. It sits on a 40,165-square-foot lot.
Pérez’s plans for the property include building a catering kitchen for events, plus four studio apartments and artist work spaces for what could be artist and curator residency programs.
“We love the location among functioning business and solid working class residences,” he said in an email.
In addition to being Miami’s biggest condo builder, Pérez, the namesake donor of the Pérez Art Museum Miami, is also known for his extensive art collection both at home and at Related’s headquarters in downtown Miami.
Miranda said the Allapattah deal is part of a growing trend of art collectors and developers moving to the industrial neighborhood just west of Wynwood.
About two years ago, the Rubell Family Collection announced it was moving from Wynwood to a new 100,000-square-foot museum at 1100 Northwest 23rd Street.
Moishe Mana has been assembling land on the eastern edge of Allapattah, just west of his Wynwood holdings.
Starchitect Bjarke Ingels was also hired to design plans for a residential, office, retail and hotel project being developed by Robert Wennett. It will rise between Northwest 21st and 22nd streets, and between Northwest 13th and 12th avenues.