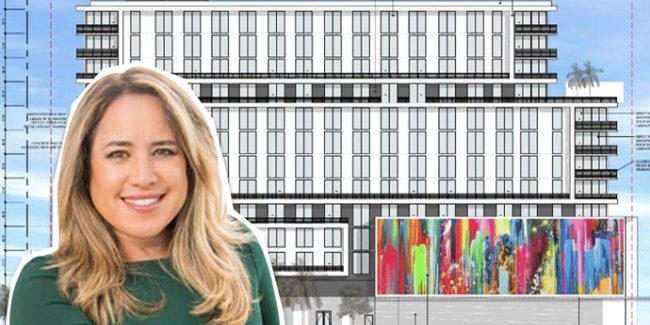 16 Allapattah would have 323 apartments, 20K sf of retail and office space and a 336-space parking structure

Lissette Calderon is firmly planting her flag in Allapattah.

The Miami Urban Design Review Board on Wednesday approved the developer’s second planned apartment project in the neighborhood. The proposed mixed-use development would have 323 apartments and a 336-space parking structure at 1625 Northwest 20th Street.

Calderon’s first planned rental project is nearby, at 1569-1652 Northwest 17th Avenue. In November, Calderon’s TCG Allapattah 17 submitted a permit application for a 13-story, 192-unit apartment building on the site.
For 16 Allapattah, the design review board approved five waivers that include extending the parking structure and covering its facade with an artistic glass or architectural treatment, as well as a 4 percent increase in the building’s floor plate above the eighth story. The project also qualified for a 40 percent parking reduction as a transit-oriented development, because the site is close to the Santa Clara Metrorail Station.
A March 4 letter submitted to the city’s planning and zoning department states Calderon’s TCG Allapattah 16 is under contract to purchase the 1.6 acre site, which has a current market value of $3.9 million, per the Miami-Dade property appraiser.

In previous interviews, Calderon told The Real Deal her goal is to create a rental portfolio in emerging neighborhoods of Miami and other cities. Last September, her company Neology Life paid $61 million for the former River Oaks Tower & Marina at 1951 Northwest South River Drive, marking Calderon’s return to the Miami River where she developed her first condominium projects in the early 2000s.
Neology Life renovated and rebranded the 21-story, 199-unit building into Pier 19 Residences & Marina, also adding a private 10-slip marina, three large cabanas for residents’ use, and creating all new common areas.