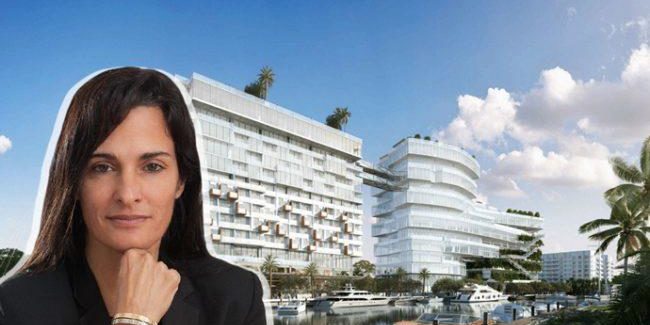 When it came to conceptualizing 555 Riverhouse, a new mixed-use project on the Miami River proposed by an Avra Jain-led development team, New York City-based architect Carlos Zapata made several site visits to soak in the maritime activities along the city’s water way.

The result is a design featuring two striking glass-and-steel buildings that resemble cargo ships weighed down by stacks of containers, Zapata told members of Miami’s Urban Development Review Board on Wednesday. “We hope [the design] captures some of the river’s character,” Zapata said. “We wanted it to feel familiar.”

Impressed by Zapata’s concept, the development review board voted 6-0 to grant seven waivers sought by Jain and her partners in order to develop the 2.3-acre property at 555 Northwest South River Drive. The development team sought permission to extend the parking component along the project’s frontage and cover it with an artistic or glass treatment and reduce parking requirements by 30 percent, among other waivers.

In June, Jain told The Real Deal she and a partnership that included tech billionaire Robert Zangrillo paid $5 million for partial ownership of the 555 Riverhouse site. Her partners also include Joe Del Vecchio and Oklahoma City developer Zerby Interests, which is the project’s majority owner. (Zangrillo removed himself from $1 billion Magic City development in Little Haiti after he was among the parents indicted in the Varsity Blues college admissions scandal earlier this year.)

Consisting of three towers of up to 12 stories, 555 Riverhouse would entail 90,000 square feet of office space, 23,000 square feet for other commercial uses, and a condo-hotel with 169 lodging units and 39 residential units that can be rented out by the owners. Amenities include a 600-foot public riverwalk and 146 feet of view corridors. According to Jain, luxury hotel brand Sixty Hotels would run the 555 Riverhouse hotel portion and the condos would be listed in the $1 million to $1.5 million range.

In addition to 555 Riverhouse, the board also granted waivers sought for the first phase of Kenect, a two-tower apartment project by Chicago developer Akara Partners, and a twin tower project proposed by Israel’s Mishorim Development Group, a publicly traded real estate company that made its first real estate play in Miami in 2016.

Kenect | Developer: Akara Partners
Kenect, designed by Perkins + Will and Stantec, will be built at the Miami Worldcenter site and features 918 units in two buildings should both phases be completed. The first phase calls for a 39-story tower with 450 residential apartments, most of which will be micro units. The building will encompass 436,258 square feet of floor area with 251 parking spaces. The second phase would be a 39-foot tower with 468 units that are bigger in size from apartments in the first tower, but still average under 1,000 square feet.